USAID/BHA funded project in Greater Upper Nile State in partnership with VSF Suisse for the period between 1st of August 2019 and 31st July 2020 with a budget of $ 1,700,000. The project was implemented in the states of Twic East, Duk, Ayod, Fangak, Pigi, Nyiror, Uror, Akobo, Pibor and Bor South Counties in Jonglei State, Panyinjiar, Mayendit, Leer, Koch, Guit, Rubkhona, Pariang, Mayom and Abiemnhom Counties in Unity State and Ulang and Nasir Counties in Upper Nile state. The project’s overall objective was to contribute to improved and sustainable access to animal source food and related income for crisis affected individuals at risk of malnutrition, particularly children and women. In 2020, the project reached 158,848 individuals with veterinary interventions, trained and equipped 125 CAHWs and vaccinated 276,849 cattle and 42,039 sheep and goats. The project worked closely with CAHWs who used community dialogue meetings and workshops to ensure maximum participation of all the stakeholders.

A Life with Cattle

Achieng Manyang Duot is a 55-year-old mother of six children and serval grandchildren who hails from Kongor Payam, Twic East County. Achieng says that her life  depends entirely on cattle and that she has spent her entire life in cattle camps where milk from their herd of cattle is the main source of food for her family. She recalls the massive flooding that occurred in their village in late 2019 and narrates thus:

“My son had 40 cattle before the flood occurred. After the floods our animals were affected by many different diseases. We lost three of them due to lack of treatment. Many other animals in the village were sick and dying from the diseases. We were very worried that we would lose our animals. Soon after, VSF Germany came to our area and started a campaign to vaccinate, treat and deworm our animals. This was a big relief to us as the diseases were controlled and the dying of the animals stopped. Now our animals are very healthy and produce enough milk for our family. We also sell some milk on the local market to get money for our other needs such as buying clothes, medicine and school fees for our children. Cows are our bank and milk is our life. Thanks to our local CAHWs here and to VSF Germany for protecting our animals from diseases. 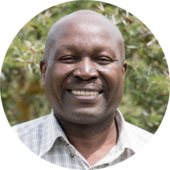 As a Kenyan veterinarian with more than 20 years of experience in project management and evaluation, Silvester Okoth is especially known for his extensive knowledge of the history and livestock management in South Sudan.

Silvester Okoth has been part of the team since 2015.

“I draw my motivation from sustainable and innovative programme development.“